This snake has been my nemesis for many years. It has been my favorite snake from herp literature, but has frustratingly eluded me in the field... Until yesterday!
The Pygmy Rattlesnake (Sistrurus miliarius) belongs to the more basal of the two genera of rattlesnakes. Unlike the larger more familiar rattlesnakes from the genus Crotalus, the Sistrurus species have minuscule rattles that, if used, are almost inaudible from more than a few feet away— the individual in the photo did not rattle. These Rattlesnakes also have a scale arrangement on their heads that closer resembles that of the non-rattling new world pit vipers (genus Agkistrodon). The reason why this snake has fascinated me so much from literature is because it is an existing and blatant “stepping stone” between the two other genera (sharing traits with both Agkistrodon and Crotalus). Furthermore, its behaviors shed some light on the evolution of the rattle— I’ll expand on this some other time. It was really great to finally see this link first hand in the field.
© Jake Zadik 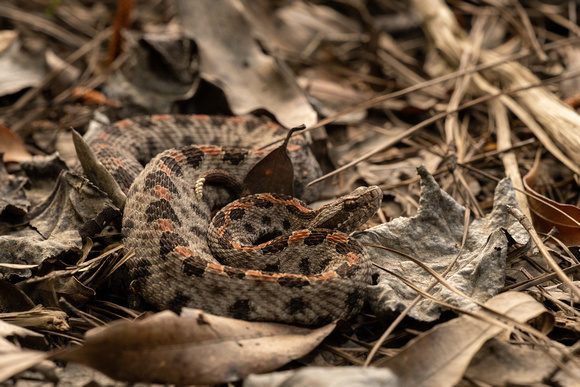