Home»photos to display at NC

Reds, yellows, pinks, and oranges are all derived from a pigment called a carotenoid. For the most part, this pigment is only created by plants, fungi, and some bacteria. But it is not created by animals. So when you see a bird like this Roseate Spoonbill, how does it get it’s pink coloration if it can’t produce it? Well, they use that utensil shaped bill of theirs to sift through muck in shallow water and feel around for slight movements. When they feel something, they will close their slightly opened bill and bring it out of the water, then flip it to the back of their bill to be consumed. In this process you often get a glimpse of what they consume. In this case, an Atlantic Brown Shrimp. These shrimp don’t produce carotenoids either, but they certainly eat organisms that do such as algae and plankton. And these pigments get passed on to the spoonbills.
This is a neat fact to know, because the colors these birds produce are a direct indication of how good they are at sifting that spoon bill in the water and capturing and consuming food. This is important information for a potential mate. The pinker, the sexier.
© Jake Zadik 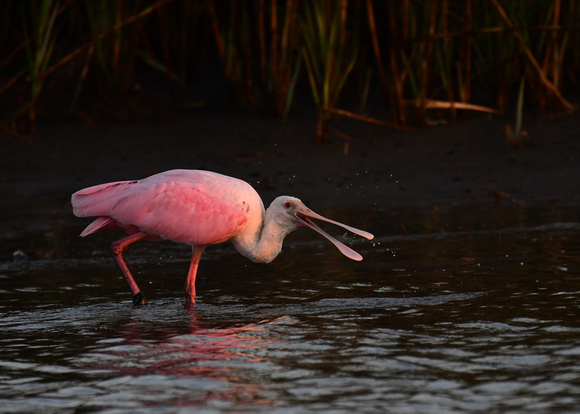